A literary tradition (instance of syriaca:LiteraryTradition) is a type of work record which groups together multiple works so closely associated that they are often not distinguished from one another. (See also Composite URIs.)

Conceptually, the term "literary tradition" refers to works that have a single broad identity (such as the Bible or Aristotle's Prior Analytics) but encompass a wide variety of actual texts, which might be, for example, multiple translations or diverging recensions of a work, or different tellings of a narrative. While it is the case that all work records in Syriaca.org represent abstract or conceptual works and thus group together manuscript witnesses and editions containing somewhat different texts, literary traditions are too broad in scope to define as a single work without further disambiguation. At the same time, the texts exemplifying them share certain core features, such as title and authorship attribution or a narrative outline, and thus should not be treated as entirely independent of each other. One can envision this difference by thinking of a literary tradition as a work that is not sufficiently homogeneous to edit in a critical edition with a traditional apparatus; rather, one would need to employ parallel columns or other mechanisms to adequately represent it.

On a practical level, listing entries for specific texts under broader literary traditions allows for convenient identification. Users searching for translations of Aristotle's Prior Analytics into Syriac may not know which versions exist and will find them more easily under the literary tradition entry. Archivists may not be able to identify which particular text they are cataloguing, but can still identify it using the URI for the more generic literary tradition. Conversely, researchers who wish to precisely identify a particular text may do so using the more specific work record for that text (such as the Syriac translation of Aristotle's Prior Analytics by George, bishop of the Arabs).

Typically, a record should be created for a literary tradition only when there are already two or more work records that will be related to it. (See Relating Literary Traditions to Other Works below.) Editions, translations, manuscript witnesses, and so on should always be placed in the more specific record for the text when possible. An exception may be made when the literary tradition cannot yet be adequately disambiguated, in which case the record and its URI serve to provide preliminary identification until specific texts can be related to the literary tradition. For example, the creator of a record for "Matthew in Arabic translation according to the Peshitta Version" may not have sufficient information to distinguish the different versions appearing in manuscripts and should therefore create this as a literary tradition that directly contains the manuscript citations and does not point to more specific work records.

Work records of the literary tradition type should be designated in the record in both a human-readable and machine-readable way:

Human-Readable: Add " (literary tradition)" to the end of the record title (/TEI/teiHeader/fileDesc/titleStmt/title) and the English headword work title (/TEI/text/body/bibl/title[@xml:lang='en' and contains(@syriaca-tags,'#syriaca-headword')]). For example,

Machine-Readable: The main bibl node (/TEI/text/body/bibl) should have @type='syriaca:LiteraryTradition'. This allows it to be visualized correctly and to be serialized into RDF with the correct class. For example,

Relating Literary Traditions to Other Works 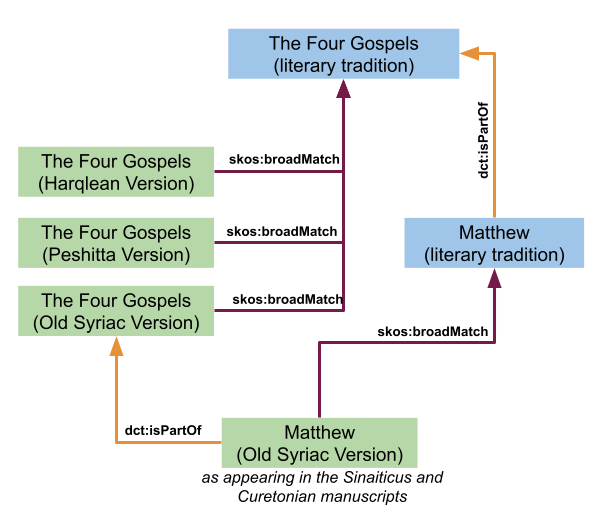